Occasionally, a product comes along that changes the rules once thought to be set in stone.

Think Lamborghini Miura, the Pulsar digital watch and, although a dedicated Android user, it pains me to say, the iPhone. These products rip up the rulebook and quickly become the go-to, must have game-changing product. They simply do something new and, in most instances, they do it well.

The MI TOWER is a member of this select bunch of products and since it was launched by Pop-Up Products in 2013, it has changed the aluminium tower market in a multitude of ways.

Aluminium towers have been with us for what seems like an eternity and the design, size and methods of building the structures haven’t really changed in that time either. The MI TOWER has managed to throw away the rule book, both in terms of the design and size. The method of building it in such a way appeals to a very broad audience including tradesmen, craftsmen and DIY’ers alike.

MI TOWER was designed to be compact, lightweight, easy to build by one person and to protect the person building it through a raft of clever, innovative features.

For instance, take the daily nightmare that hire companies operating in and around London face, in just trying to deliver equipment to job sites. The traditional aluminium tower system, based on frames that measure up to 2 x 1.45m and components up to 2.5m long, contains on average 32 components for the most used platform heights. All these components are loaded loose on a flatbed truck and unloaded, by hand, at the job-site. This can take anything up to 30mins for a single tower or even 45mins for two towers.

The delivery drivers face constant problems with parking tickets or having restricted unloading timeslots. You can only imagine the stress levels caused by this daily activity.

MI TOWER, which has a footprint of 0.728 x 1.170m, weighs in at a total of 108kg, can utilise its own components to build a transportable trolley and can utilise this trolley to store the remaining loose components in a safe and tidy way.

The average flat-bed truck can easily accommodate four MI TOWERS each capable of being built up to a platform height of 4m. The trollies can be loaded and unloaded safely in a matter of minutes with the minimum of fuss or effort by the driver and can reduce stress levels and parking fines significantly!

What about productivity, can the MI TOWER help in this aspect? Well, the short answer is yes, and it does it by helping the user/erector with time-saving features such as the component hangers and Easy Lock stabiliser couplers. The most innovative feature is the components hangers as these allow the erector to hang components being used to build the tower on them. This allows just one person to safely erect the tower.

Traditionally tower erection has been a two-person activity so let’s just compare average times for traditional aluminium tower and the MI TOWER: 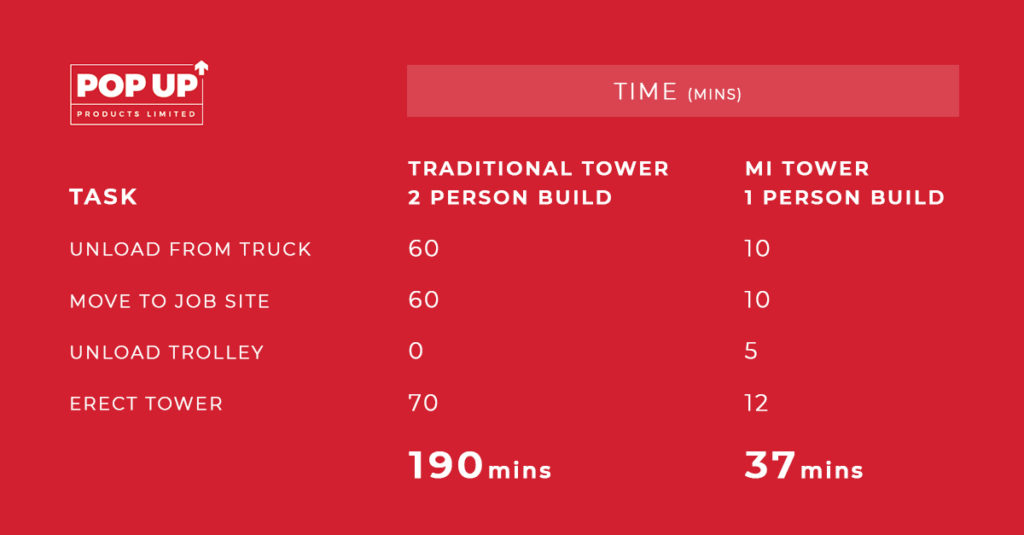